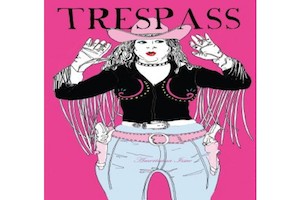 By July 5, 2009Publications
No Comments

The 50 States Project
Stuart Pilkington gets 50 photographers involved in exploring the American landscape through the lens of personal experience.

Sexuality: The Ultimate Import: Stripping the Illusion Sabrina Mahfouz whips off the nipple tassels and discards the myths behind stripping.

Photostory: ‘Reflections: Looking at the Man in the Mirror’ by Izaskun Gonzalez and Sarah Maple. Trespass gets two poets and an artist to create their own homage to Michael Jackson. Featuring Heather Taylor, Sarah Maple and Nick Makoha.

Art by Juliet May and Seth Butler.

Theatre: Extract from Torben Bett’s play Lie of The Land.