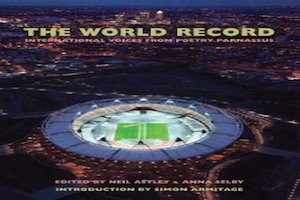 “The World Record” is a unique publication, a snapshot or cross-section of global poetry from over two hundred countries. Poetry is surely one of the planet’s oldest art forms, an Olympic event no less in ancient time, and during London’s Olympic year of 2012 the Southbank has sought to recreate a small piece of Greece along its riverside complex, namely Mount Parnassus, home to the muses and home to Orpheus, often described as “the first poet”. This ambitious anthology is not only a record of that extraordinary happening but an enduring and echoing experience, one that celebrates and honours a multitude of voices, languages and attitudes, all joined under the flag of poetry. —Simon Armitage.