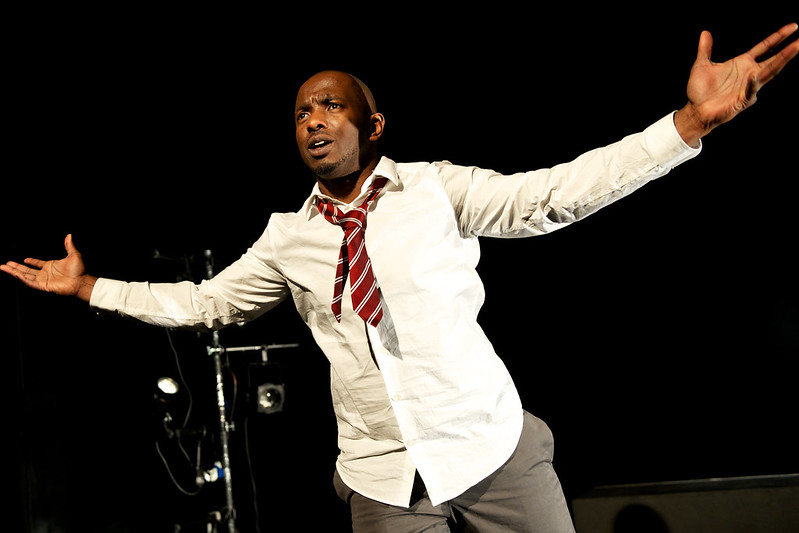 Hit the title above to transmute to the Unicorn Theatre website eflyer.

As promised I have another surprise for you. Did you keep Father’s day free? A new date added. A Father’s Day showcase of My Father & Other Superheroes at The Unicorn theatre. Dads bring you kids along. Kids bring your dads along. In fact get the whole family down Sunday 16th June 2013 – 2PM. And for you early birds we have a Superheroes’ brunch. Booking required via Box Office. You have to thank the Wonder Woman that is Artistic Director Purni Morell  for making this happen. She took a day out of her holiday to came to see a low-fi version of the show at the Ilkley Literature Festival.

Got a pleasant surprise yesterday morning in the post. My daughter opened her Stagecoach magazine and saw a flyer for the show with her dad’s face. She would not let go of it while getting ready or eating her breakfast. She wants to take it in to school today for show-and-tell today. (cue tears, cue Hollywood ending). Hope to have a few more surprises for you. That’s all I can say for now. So here is the Hero sandwich so far

3: Hero In You tumblr Blog
Its my online installation of ideas behind the show and fatherhood. This is where you can get involved if you tweet me with #fathersuperhero. Hit me with you favourite father, comic or hero    stories and images.

Now if that’s not a sandwich you can’t sink your teeth into then I don’t kno what is.

I used to love watching the Hulk. I could quote the opening credits verbatim. An eight year old me had the Hulk’s rage and David Banners intelligence. But the real parallel was that at the prologue and epilogue of each show David Banner was in a new town or city trying to fit in. Ok repeat after me in your best American voice over.

Dr. David Banner: physician; scientist. Searching for a way to tap into the hidden strengths that all humans have – The Incredible Hulk
Share Tweet Share Pin