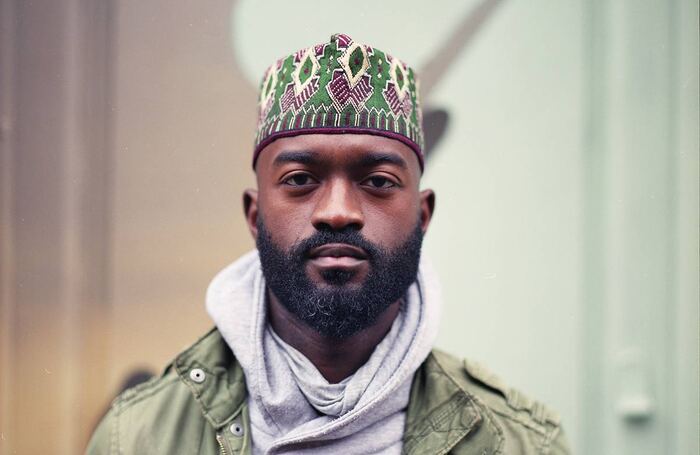 Nick Makoha is no stranger to Words of Colour. When we interviewed him back in 2012 he was one of 10 new poets selected for Spread the Word’s Complete Works development programme, and his poems were published in the Ten Anthology. He had also just debuted his new show My Father and Other Superheroes.

Fast forward three years and he is cautiously basking in the afterglow of being a joint winner, with Safia Elhillo, of the Brunel University African Poetry Prize 2015. His second pamphlet, The Second Republic, was published in the African Poetry Book Fund’s Seven New Generation African Poets series, and will soon be published as a full collection by a major press.

Makoha tells Joy Francis how despite winning the prize he needs to believe in himself more, why he feels poetry is for everyone and and why he is working with poets such as Lemn Sessay to develop the next generation of poetic talent.

Congratulations on winning the Brunel University African Poetry Prize 2015 jointly with Safia Elhillo. Your poetry was described as “both lyrical and brutal”. How does it feel to have won and what impact would you like it to have on your profile and work?
When I first heard the news I was in shock for about a week. My friends who are writers always believed in me but I don’t think I believed in myself. Winning the award showed me that I need to believe in myself more. Despite being shortlisted for many prizes, I am a very harsh critic of my work, so winning eased the pressure I put on myself. I was getting emails and tweets for three to four days after winning. I still haven’t yet celebrated the win, but I plan to. I’m about to get married so marriage is my priority, and I want to celebrate with my children and partner who have been very gracious with me. I want to do more with my writing, to push it further. I knew my writing was going in a direction of discovery and I guess I really wanted to prick that sense of imagination and wonder I’m entering into with my work.

Also your second pamphlet, The Second Republic, will be published as a full collection by a major publisher. That sounds exciting.
I’ve been in a kind of writer’s limbo. Your first collection is an important crossroad for a writer. The writer I was in 2012 is nothing compared to the writer I am now. The poems I write now are almost as if they are from another planet. The Seven African Pamphlet series in America features seven new generation African poets. I was in that collection. They put out a second one to give a flavour of new writers and took poems from the Second Republic pamphlet. So I am excited about the full collection being published. I hope it does wonders for my career. I am a full time writer – there is no plan B. I hope it opens door and allows publishers to take me seriously as they can drag their heels. I also write plays and scripts, so I really want to push on and not be stagnant.

When I interviewed you back in April 2012, you had just launched My Father and Other Superheroes. My Father… is still touring and has been seen in countries, such as the US, Finland, the Czech Republic and the Netherlands. How has the show changed and why has it captured the imagination so much?
The first thing that changed was the ending. When I first started it, the story wasn’t complete because I wasn’t complete. I was still resolving issues with my dad. Theatre was the last thing I wanted to enter into but it has changed my outlook on fatherhood – and me. The quote I’ve been giving a lot recently is that fatherhood is like being the ground. You don’t notice the ground, but you rely on it to stand on. You can spend a lot of time being angry with your father, but they have an important part to play in forming who you are. I asked my father for his forgiveness as I was angry with him for a long time. He said, “I have never been angry with you. You will always be the boy and man I love. The thing I like about you Nick is that you have chosen a creative way to deal with the things that trouble you rather than a destructive way.” This process has helped me to improve as a writer. Writing this play forced me to write in a different way and stopped me from being clichéd.

In the past, you described your poetry as weird. Is that still the case?
I think my poetry now surprises me more than it did in the past. It has flourish and style. Back then, I was trying to say things in an obscure way. I have a more delicate touch in how I use language. I appreciate language more than I used to. I’m now more comfortable with me as a writer, with my ability and I’m more willing to be in that space which isn’t safe. I used to call my poetry weird as I was uncomfortable with being in that space of discovery and the unknown. I now search for that space. My work is a representation of who I am, and I feel more like myself than when we last spoke.

You have said that poetry belongs to everyone. Do you think with the growth in youth spoken word collectives that this message is taking root?
I think the message was always there, but it is now more visible. You have to be careful as it is also stylish to be a poet and you can get a large audience listening to you, but I’m more thinking of it as part of a tradition. What I do isn’t new. There have been many people before me who have translated the human experience and used rhythm and sound within language. Also it translates the story of who we are, not just the human condition and who we struggle to be.

Did you really burn your nine to five work clothes on a balcony in 2001 to mark your commitment to a career of poetry?
Yeah, that is a true story. It was summertime. I had walked to work in my home clothes and changed into my bank worker suit. It was my last day at work and I said to myself:  If I keep having a back door, I will keep using the back door. I decided that I’d rather try with my whole being to be a poet and sail rather than try to be lukewarm as a writer. I was angry that I had waited so long to do it, but in many ways George Szirtes [acclaimed poet] gave me the best advice. He said you don’t become a great writer overnight, even with promise and ability. The burning of my bank clothes that day was a symbol for me to let go of the fear. The fear of saying I was a poet, and writing and sharing it with other people. As I deal with each fear, the writer emerges, and that’s the person I want the world to know.

What next for you?
I don’t think I realised how busy my life is. There’s the Spalding Suite with Inua Ellams. I’m going to an African American writing retreat – Cave Canem. This is my second year. Next year is my final year. I’ve just signed on to an MA in Creative Writing as I’ve been asked to do a PhD, so I want to go the whole hog. I’m writing a new play and I’m starting to gather work for two new poetry collections. And based around my show, which is touring, I have a development programme called Replay to work with five BAME writers to develop their own one person show. Each writer has been mentored by a prominent artist: myself, Inua Ellams, Lemn Sessay, Ola Animashawun from the Royal Court and Stacey Makishi, along with my producers Nimble Fish. On 30 July 2015 the writers will showcase their work at Poetry International.

We are not Alexander, who conquered worlds
giving them new tongues. But we share the story
of a ship resting on an African river, unbuckling
at its shore, awakened by the nights cold hard rain,
staring at the face of the Nile as it reminds you.

What makes a man name a city after himself;
asking bricks to be bones, asking the wind
to breathe like the lungs of the night,
asking the night to come closer, to speak
to  you as a tribe, asking the tribe to sleep,
asking sleep to loosen its language, asking
language to dream. Come close to me.

Can you not see that I am in search of fire?
The unshapen song of light. In my mouth
is a name hovering like smoke, spoken to me
by the oracle. Like others, I was in search
of a forest, a place to call home.

But what can I tell you about Kingdom,
about having the world at your feet?
When you have seen all the earth’s boundary,
you will crave for mirrors searching for them in streams,
and when the river looks back at you
how will you be sure that nothing is lost?