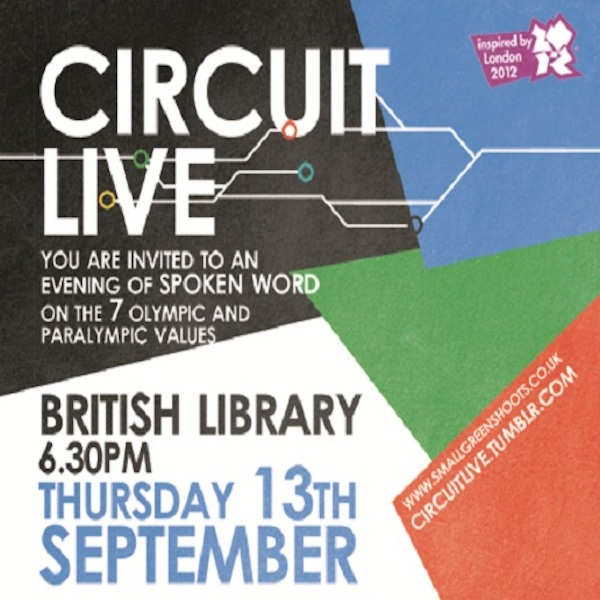 Circuit Live, delivered by Dv8 Training and managed by Small Green Shoots, was a spoken word project inspired by London 2012 and involving children not in education, employment or training (NEET) in workshops held in libraries across London in Camden, Lambeth, Lewisham, Waltham Forest and Westminster.

The project aimed to increase library membership among 15 to 19 year olds and promote London libraries as a rich resource to local young people. They wanted every young person to have achieved an Arts Award or equivalent qualification and to grow in confidence in reading, writing, spoken word performance, IT and local history.

The team also hoped to establish working relationships with local artists, youth centres and library staff and to use spoken word as a creative tool for expression. They wanted to create a legacy for the programme in the form of a website linking projects and project staff for future work that would also serve as a resource for future projects working on the same model.

Circuit Live involved five libraries in five London boroughs in all corners of the city, with each library hosting a series of spoken word workshops for young people, led by the musicians and performance poets. The young people were recruited through local youth centres, the library staff offered their skills and the library building as a resource, and both the project managers and library staff were trained as Arts Award assessors, meaning the participating libraries are now all accredited Arts Award centres.

The workshops were based around the themes and values of the London 2012 Olympic and Paralympic games and the young people were asked to create a 2.12 minutes long spoken word piece at the end of their mentoring. Their work was celebrated with a final performance on September 13 at 6:30pm.  The British Library is set to host an outdoor relay race-style spoken word event, which will unite aspiring young poets from all over London to showcase material inspired by the seven Olympic & Paralympic values: Excellence, Respect, Friendship, Inspiration, Determination, Courage and Equality.

For more details on how you can get involved, check out the site.